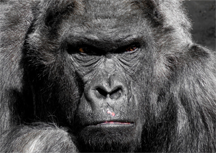 A popular video floating around the Web is the "selective attention test" by Simons and Chabris. It shows a group of six basketball players, three wearing white, and three wearing black. Each group of three is passing a basketball among their group. Viewers are instructed to count the number of times the white team passes the ball. In the midst of the action, someone in a gorilla suit walks across the court. Because most viewers are focusing on the white team's basketball passing, they completely miss the gorilla. They just don't see it.

This failure to notice the obvious illustrates a phenomenon called inattentional blindness, which happens when we're so focused on one visual task that we literally don't see something else that's in plain view. It suggests the possibility that other phenomena can account for our failures to notice or take account of things that are obvious in retrospect. Here are the first two of six tips for reducing the chances of missing the obvious, emphasizing causes that apply to individuals.

Inattentional meta-blindness
We can What accounts for our failures to
notice or take account of things
that are obvious in retrospect?generalize inattentional blindness, which is a visual phenomenon, to the nonvisual. Sometimes we become "thought blind" to events, concepts, or information that's obvious in retrospect. If we're intensely focused elsewhere, we might be unaware of the "gorilla" that just walked across the mental scene. In risk management, for example, we might plan for some risks, and miss others altogether, even when the ones we misssed are more likely. See "Ten Project Haiku:iv" for more.
When we're engaged in observation, meta-blindness can arise from a cognitive bias known as the focusing effect, which is the tendency to place too much importance on one aspect of a situation, ignoring others that might be equally or more significant. This tendency also applies to abstract contemplation. For example, the risk of inattentional meta-blindness is high when we focus intensely on difficult subject matter, or when we're under pressure to complete complex tasks. In those circumstances, we often forget to take breaks, or we feel that we have no time for breaks. But that's just when breaks are most important. See "The Shower Effect: Sudden Insights," Point Lookout for January 25, 2006, for more.
Not looking
Inattentional meta-blindness is looking, but not seeing. Not looking is another matter. When we have a favored outcome, when we believe we understand a situation thoroughly, when we have preconceptions about how something came to be or how it will develop, we're less likely to look for alternative explanations or alternative predictions.
The more certain we are that we understand what has happened, or what is happening, or what will happen, the more important it is to ask ourselves, "What if we're wrong?" Here's a quick way to do it: ask yourself, "If it turns out that I'm wrong about this, what would I have been most likely to have overlooked?"

We'll list four more next time, two of which are of special interest to groups or teams.  Next in this series

Films Not About Project Teams: I
Here's part one of a list of films and videos about project teams that weren't necessarily meant to be about project teams. Most are available to borrow from the public library, and all are great fun.

Status Risk and Risk Status
One often-neglected project risk is the risk of inaccurately reported status. That shouldn't be surprising, because we often fail to report the status of the project's risks, as well. What can we do to better manage status risk and risk status?

Projects as Proxy Targets: II
Most projects have both supporters and detractors. When a project has been approved and execution begins, some detractors don't give up. Here's Part II of a catalog of tactics detractors use to sow chaos.

Some Risks of Short-Term Fixes
When we encounter a problem at work, we must choose between short-term fixes (also known as workarounds) and long-term solutions. Often we choose workarounds without appreciating the risks we're accepting — until too late.