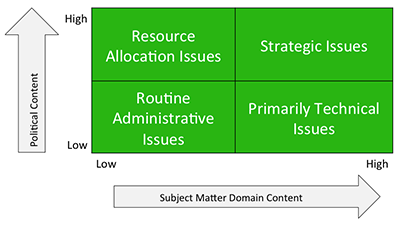 to administrative tasks such as agenda setting, most team meetings cover a mix of information distribution, status reporting, issue reporting, issue clarification, and problem solving. But meetings are so expensive and difficult to schedule — and as many say, so painful — that shortening them or making them less frequent is a real benefit. One approach to shortening regular team meetings is to move to broadcast media such as email or podcasts any meeting content that doesn't actually require real-time interaction. That would include most information distribution and status reporting. So let's set them aside.

Solving problems of any significant difficulty is probably best approached not in regular team meetings, but in meetings dedicated to solving those problems. There we can ensure we have the time, information, and people we need to evaluate progress on working the problem, to develop new candidate solutions, and to set task assignments for further investigations. So let's set problem solving aside as well.

What remains for regular team meetings, for the most part, is issue reporting and issue clarification. If we spend our time in team meetings focusing on uncovering issues and clarifying them to the extent we can with what we now know, we can shorten meetings and get back to work. This is especially useful for standup meetings, which are intended to be short.

Unfortunately, achieving this objective is rarely straightforward. Pitfalls abound. With that in mind, I offer a set of guidelines for avoiding the pitfalls of issues-only team meetings.

Some have expressed concern that issues-only meetings might be very difficult and tense. There is a risk that these meetings can become blamefests, especially if all or most of the issues seem to point in the direction of a few team members. One way to manage this risk is to adjust the culture of the team. Ensure that the team culture includes an understanding that although we might divide our work into tasks to be pursued by specific people, the tasks are all interconnected. An issue that surfaces in the context of one task isn't necessarily a result of malpractice by anyone — including the people responsible for that task. Any issue can have its source in multiple other tasks, or even in work that's beyond the responsibility of the team as a whole. Discovering an issue is most likely a gift — a contribution to the work of the team, rather than a hindrance to achieving success.

Do you spend your days scurrying from meeting to meeting? Do you ever wonder if all these meetings are really necessary? (They aren't) Or whether there isn't some better way to get this work done? (There is) Read 101 Tips for Effective Meetings to learn how to make meetings much more productive and less stressful — and a lot more rare. Order Now!

Remote Facilitation in Synchronous Contexts: II
Facilitators of synchronous distributed meetings — meetings that occur in real time, via telephone or video — encounter problems that facilitators of face-to-face meetings do not. Here's Part II of a little catalog of those problems, and some suggestions for addressing them.

Allocating Airtime: II
Much has been said about people who don't get a fair chance to speak at meetings. We've even devised processes intended to more fairly allocate speaking time. What's happening here?

How to Waste Time in Virtual Meetings
Nearly everyone hates meetings, and virtual meetings are at the top of most people's lists. Here's a catalog of some of the worst practices.

Costs of the Catch-Me-Up Anti-Pattern: I
Your meetings start on time, but some people are habitually late. When they arrive, they ask, "What did I miss? Catch me up." This is an expensive way to do business. How expensive is it?

Interrupting Others in Meetings Safely: I
In meetings we sometimes feel the need to interrupt others to offer a view or information, or to suggest adjusting the process. But such interruptions carry risk of offense. How can we interrupt others safely?