Chris pushed back from his desk and stared at his display. The earliest completion date was now three months later than before his latest schedule changes. Resting his chin on his left fist, he let out a deep sigh. 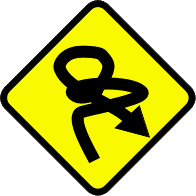 Just then, Warren walked by, waving as he went. 'Uh-oh,' Chris thought.

Sure enough, Warren stopped, turned back, leaned into Chris's office and said, "You don't look happy."

Chris looked up. "Dropping the Bluefield requirements didn't help. Actually, it got worse."

Warren looked at his watch. "Well, if you don't figure this out by Eleven, let's all meet in my conference room."

Chris and Warren are having a familiar conversation. When we make changes that ought to speed things up, things usually slow down.

Denying negative surprises
When you deny the significance of bad news, you start losing time immediately. Review carefully all denials of the significance of surprises.
A drumbeat of bad news
When you deny the
significance of bad news,
you start losing
time immediately
Troubles often travel in herds. When things aren't going well, staying the course could be a questionable strategy. See "Flanking Maneuvers," Point Lookout for September 8, 2004.
Outdated, inadequate, or shared equipment
Using obsolete or worn out equipment, or having to schedule the use of essential equipment, costs time and creates delay. See "The Cheapest Way to Run a Project Is with Enough Resources," Point Lookout for March 21, 2001.
Extremely tight or very lax deadlines
Reasonable deadlines encourage risk-taking, which is essential for discovering innovative solutions. Extreme pressure — or the absence of all pressure — threaten both creativity and quality. See "Make Space for Serendipity," Point Lookout for September 25, 2002, and "Critical Thinking and Midnight Pizza," Point Lookout for April 23, 2003.
Fractional people
When too many projects depend on a few people with critical skills, their time becomes fragmented, and they must constantly switch between tasks. Often their productivity falls as fast as the quality of their work. See "When Is Change for a Dollar Only 82 Cents?."
Relaxing requirements to maintain schedule
In today's environment, requirements do change. But relaxing requirements solely to maintain schedule could be a warning of trouble ahead. The tactic rarely saves time, and it often has the opposite effect.
Adding staff
Adding staff always slows things down, even if your intention is to speed up.
Meetings consistently running overtime
In a well-run project, some meetings run over — but some finish early. If you always run over, look out for trouble.
Underused consensus
Consensus produces the most durable decisions. If you never use consensus, even when time does permit, some decisions could be flawed. More important, avoiding the use of consensus could be an indicator of trouble on the team. See "Decisions, Decisions: I," Point Lookout for November 17, 2004.
Closed communications
If an elite group deals with bad news, making critical decisions without participation of the team at large, and controlling the circulation of information about the bad news, then it's possible that the bad news is worse than many people believe. See "See No Evil," Point Lookout for March 30, 2005.

Most projects exhibit at least some of these traits from time to time. Track their incidence. When many are present, and when they settle into a stable pattern, you might be in for a wild ride. Spend a little extra time looking around the next turn.

Ron Thompson, Eiscon Group, Ltd. (www.eiscon.com)
One of your best yet! I have stories about all of your nine indicators (I think eight of them come from the same project). I wanted to pass along a couple.
On adding staff I was once able to head this off. I was leading a pressure project where we were tracking on time, but tight. The manager asked me when we could deliver if he gave me another person. I looked him in the eye and said two months later. He never brought it up again (and we delivered on time).
On meetings consistently running overtime I was on a project that was running extremely late, so the manager started holding daily status meetings that usually ran at least an hour. At one, he asked if anyone had ideas to get the project back on track. A co-worker (and friend of mine) quietly says from the other end of the table, "We could try getting back to work instead of sitting in this ******* meeting." The manager never did get a clue and the project ended up dying a slow death.
On closed communications Even worse, the project team invents rumors that the bad news is worse than many people believe, even if the "elite group" isn't even dealing with bad news!

The Injured Teammate: I
You're a team lead, and one of the team members is very ill or has been severely injured. How do you handle it? How do you break the news? What does the team need? What do you need?

Personnel-Sensitive Risks: II
Personnel-sensitive risks are risks that are difficult to discuss openly. Open discussion could infringe on someone's privacy, or lead to hurt feelings, or to toxic politics or toxic conflict. If we can't discuss them openly, how can we deal with them?

More Obstacles to Finding the Reasons Why
Retrospectives — also known as lessons learned exercises or after-action reviews — sometimes miss important insights. Here are some additions to our growing catalog of obstacles to learning.

Seven Planning Pitfalls: II
Plans are well known for working out differently from what we intended. Sometimes, the unintended outcome is due to external factors over which the planning team has little control. Two examples are priming effects and widely held but inapplicable beliefs.

The Risk of Astonishing Success
When we experience success, we're more likely to develop overconfidence. And when the success is so extreme as to induce astonishment, we become even more vulnerable to overconfidence. It's a real risk of success that must be managed.