Yesterday I went to buy fruit at my local market. Picking out some nice peaches, I noticed that the cherry boxes were empty. So I walked over to a man in a white shirt, who was feverishly stacking lettuce, and asked about the cherries. He had on a nametag that read "Stan."

When you rank problems
according to total cost,
think short term
and long term"I'll go look, be right back, sir," he said, and disappeared through the swinging doors at the back of the store. Stan is always helpful.

Meanwhile I went looking for grapes. They were low, too, as were the nectarines. Unusual, I thought. I moved on, and got lost in thought picking out sweet corn.

A few minutes later, Stan returned and called to me: "Got the cherries, sir."

"Yeah, the morning guy no-showed, and I just can't catch up."

As we chatted, a woman approached and asked about the grapes.

"I'll go look, be right back, ma'am," he said to her, and left again through the swinging doors. 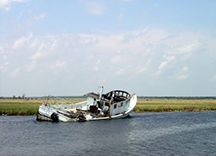 Now I understood: Stan was behind because he had been spending too much time with singleton service requests, and not enough time on catching up. I didn't blame him — he was probably following instructions — but it's a heck of a way to run a produce department.

And that's how many of us deal with similar situations. When we're flooded with problems, and the rowboat is taking on water, we tend to bail with buckets rather than take time out to plug the leaks. Here are some tips for dealing with floods of problems.

Understand present value
Rank problems according to total cost — the short-term cost plus the present value of the long-term cost. Giving too much weight to short-term cost can keep you from finding a more effective approach. In the produce department, making a single trip to deal with several stockouts at once could have helped Stan catch up.
Manage the escalation process
Why are you flooded? Are problems coming to you when they ought to be dealt with elsewhere? Monitor escalations to ensure that they happen only when they should.
Detect before affect
Measure the incidence, resolution, and escalation rates at all levels that deal with problem triage. This alerts everyone in the escalation chain as a pulse of problems moves along. It helps them plan, and prevents the false starts that happen when they have to drop one problem to solve another.

Sometimes the feeling of being flooded is a problem in itself, because we can't think clearly under pressure. Accept that in a flood, you're bound to get a little wet, and focus on clearing the flood as best you can.

Would you like to see your comments posted here? rbrenXEiRBfuFHUtjHrqUner@ChacpYPvvSVhUNIOeXHKoCanyon.comSend me your comments by email, or by Web form.

When Your Boss Is a Micromanager
If your boss is a micromanager, your life can be a seemingly endless misery of humiliation and frustration. Changing your boss is one possible solution, but it's unlikely to succeed. What you can do is change the way you experience the micromanagement.

Excuses, Excuses
When a goal remains unaccomplished, we sometimes tell ourselves that we understand why. And sometimes we do. But at other times, we're just fooling ourselves.

Just Make It Happen
Many idolize the no-nonsense manager who says, "I don't want to hear excuses, just make it happen." We associate that stance with strong leadership. Sometimes, though, it's little more than abuse motivated by ambition or ignorance — or both.

Contextual Causes of Conflict: II
Too often we assume that the causes of destructive conflict lie in the behavior or personalities of the people directly participating in the conflict. Here's Part II of an exploration of causes that lie elsewhere.

Meeting Troubles: Collaboration
In some meetings, we collaborate not in reaching objectives, but in preventing our doing so. Here are three examples of this pattern.

Coming September 22: Formulaic Utterances: I
With all due respect is an example of a category of linguistic forms known as formulaic utterances. They differ across languages and cultures, but I speculate that their functions are near universal. In the workplace, using them can be constructive — or not. Available here and by RSS on September 22.

And on September 29: Formulaic Utterances: II
Formulaic utterances are things we say that follow a pre-formed template. They're familiar to all, and have standard uses. "For example" is an example. In the workplace, some of them can be useful for establishing or maintaining dominance and credibility. Available here and by RSS on September 29.

I offer email and telephone coaching at both corporate and individual rates. Contact Rick for details at rbrenXEiRBfuFHUtjHrqUner@ChacpYPvvSVhUNIOeXHKoCanyon.com or (650) 787-6475, or toll-free in the continental US at (866) 378-5470.

The Power Affect: How We Express Our Personal Power

ion makers in modern organizations commonly demand briefings in the form of bullet points or a series of series of bullet points. But this form of presentation has limited value for complex decisions. We need something more. We actually need to think. Briefers who combine the bullet-point format with a variety of persuasion techniques can mislead decision makers, guiding them into making poor decisions. Read more about this program.

rbrenXEiRBfuFHUtjHrqUner@ChacpYPvvSVhUNIOeXHKoCanyon.comSend a message to Rick

Bad boss, long commute, troubling ethical questions, hateful colleague? Learn what we can do when we love the work but not the job.
Reader Comments About My Newsletter
A sampling:
Toxic Conflict Is Costly