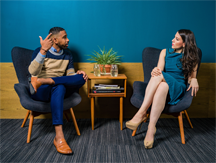 At work, where relationships usually lack the context of shared family history, condescending remarks and gestures make trouble. Even if the conversation manages to maintain a peaceful veneer, condescension can leave a bitter residue that can taint later exchanges or possibly entire relationships. General advice about avoiding condescension is useful, but general advice can be difficult to apply in the moment. One reason for the difficulty is that we tend to use habitual patterns in our language that we don't recognize as possibly condescending. These patterns might have been innocent enough in the context in which we learned them, but they might not work as well in other contexts. Unintended condescension can be the result.

The fundamental problem is that we cannot control what other people do with what we say.

We tend to assume that we appear to be condescending to others only when we intend to. That's an unfortunate mistake. But we can reduce the likelihood of making these mistakes by avoiding a limited number of phrases and tactics that many people experience as condescending. Below are two examples of phrases to avoid. In what follows, I'll use the name Charlotte (for Condescender) to refer to the author of the unintended condescending remark. And I'll use the name Edgar (for Experiencer) to refer to the person in the conversation who experiences Charlotte's words as condescending.

What you're forgetting is…
This construct Condescension can leave a bitter
residue that can taint later
exchanges or possibly
entire relationshipsis one of a class that includes, in the place of forgetting, words or phrases such as overlooking, neglecting, failing to mention, or ignoring. [Note 1]. For example, Charlotte might be interpreted as condescending when she says, "What you're forgetting is that the system works fine with Module Delta instead of Module Alpha."
Using this construct risks being interpreted as condescending because the construct critiques Edgar's thought process, rather than the content of his comments. When Charlotte uses this construct, she's actually claiming to know that Edgar has forgotten, or overlooked, or neglected something. That claim by Charlotte raises a question: "Does she really believe that she has such superior intellectual powers that she might know exactly what's wrong with Edgar's thought process?"
Charlotte would be on much firmer ground if she were to question Edgar's comments directly, rather than claiming to be so insightful as to know how he came to what she believes is an incorrect conclusion. She could say, for example, "How does that explain why the system works with Module Delta but not with Module Alpha?"
It's not that simple
When used in conversational debate, this phrase criticizes Edgar's position by asserting that his position lacks the complexity or nuance necessary for addressing the issue at hand. As the introductory phrase of a conversational contribution, it's a criticism offered without evidence, which creates the conditions for some people to experience it as condescending. This happens even when evidence justifying the criticism follows immediately after the phrase.
This one is especially dangerous because it has acquired a role typically played by embolalia — the filler words and phrases we use in everyday speech to help us gain time to gather our thoughts. So while Charlotte is actually using the phrase merely to stall for time to compose her thoughts, Edgar experiences condescension that Charlotte didn't intend.
To be safer, Charlotte can supply the foundation for the criticism before the criticism itself. But even better, she can ask Edgar how his position addresses whatever shortcoming Charlotte has in mind.

Next time we'll explore how we risk unintended condescension by using common expressions unrelated to judgments of others or judgments of what others have said.  Next in this series

[Note 1]
The structure also has some intentionally aggressive or offensive forms, such as "What you're concealing" or (shudder) "What you're lying about," but these forms are outside the category of unintended condescension. Back

The Unappreciative Boss
Do you work for a boss who doesn't appreciate you? Do you feel ignored or excessively criticized? If you do, life can be a misery, if you make it so. Or you can work around it. It's up to you to choose.

Animosity Patterns
Animosity between two people at work is often attributed to "personality clashes." While sometimes people can't get along, animosity can also be a tool for accomplishing strictly political ends. Here's a short catalog of some of its uses.

Impasses in Group Decision Making: IV
Some impasses that develop in group decision making relate to the substance of the discussion. Some are not substantive, but still present serious obstacles. What can we do about nonsubstantive impasses?

Contextual Causes of Conflict: II
Too often we assume that the causes of destructive conflict lie in the behavior or personalities of the people directly participating in the conflict. Here's Part II of an exploration of causes that lie elsewhere.

Capability Inversions and Workplace Abuse
A capability inversion occurs when the person in charge of an effort is far less knowledgeable about the work than are the people doing that work. In some capability inversions, abusive behavior by the unit's leader might be misinterpreted as bullying.

Coming December 7: Reaching Agreements in Technological Contexts
Reaching consensus in technological contexts presents special challenges. Problems can arise from interactions between the technological elements of the issue at hand, and the social dynamics of the group addressing that issue. Here are three examples. Available here and by RSS on December 7.

And on December 14: Straw Man Variants
The straw man fallacy is a famous rhetorical fallacy. Using it distorts debate and can lead groups to reach faulty conclusions. It's ad readily recognized, but it has some variants that are more difficult to spot. When unnoticed, trouble looms. Available here and by RSS on December 14.