Last time we began exploring the Restructuring-Fear Cycle, which shows how the fear induced by restructuring can create a need for more restructuring. In effect, organizations can become addicted to restructuring. Here's Part II of our exploration. 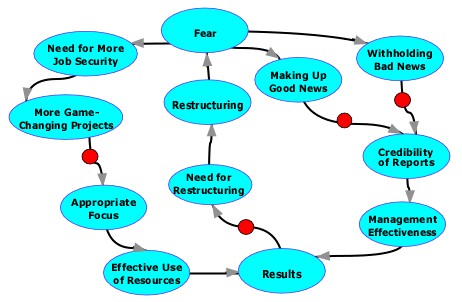 Credibility erosion
When employees notice a pattern of restructuring, many assume that their own performance, and that of their business unit, will affect decisions about their job security. Correct or not, this speculation can lead to withholding bad news, or worse, creating fictitious good news. As status reports travel up the management chain, some recipients, anticipating this shading of the truth, doubt the veracity of the reports.
When what we say to each other becomes unreliable, managing the organization becomes truly difficult. Enterprise performance is at risk. In this way, restructuring events can degrade enterprise performance, which increases the need for further restructuring. Top-to-bottom management replacement, as in a spin-off or acquisition, is sometimes the only way to end this cycle.
Getting things in under the wire
Among managers who recognize that further restructuring lies ahead are those who undertake so-called game-changing projects that promise a brighter future. They're hoping, in part, to enhance their own job security. Because they typically believe that the opportunity for initiating new projects is short-lived, they tend to oversell the attractiveness of their initiatives by representing them as better developed, lower-risk, more important, and more urgent than they really are.
This dynamic can lead the enterprise to undertake too many new efforts, many of them too disconnected from its core mission. The problems inherent in development are often understated, and the downstream costs of supporting new offerings are often underestimated. Many of these efforts come to nothing. The resources invested are wasted, which leads to enhanced necessity for further restructuring.
Roster padding
Within most Among managers who recognize that
further restructuring lies ahead
are those who undertake so-called
game-changing projects that
promise a brighter futureenterprises, we can usually find a most-politically-powerful entity — a brand, a business unit, or a constellation of smaller entities exploiting a single market position. To employees who fear job loss as a consequence of restructuring, the most-politically-powerful elements seem like possible havens of job security.
Managers within the politically powerful elements thus sometimes experience a flux of jobs seekers from other business units. Before the restructuring began, some of these people would not have been obtainable at the rates being offered, or not obtainable at all. Some managers succumb to the temptation to make internal hires. When external hiring is frozen, but internal transfers are still permitted, politically powerful entities can find themselves bloated with employees and projects. Their expenses climb, and soon there is need for yet another round of restructuring.

I could go on, but I think you get the idea. Restructuring breeds fear, fear lowers margins, and the cycle continues. First in this series

Would you like to see your comments posted here? rbrenmhXARWRMUvVyOdHlner@ChacxgDmtwOKrxnripPCoCanyon.comSend me your comments by email, or by Web form.

More articles on Emotions at Work:

Conflict Haiku
When tempers flare, or tension fills the air, many of us contribute to the stew, often without realizing that we do. Here are some haiku that describe some of the many stances we choose that can lead groups into tangles, or let those tangles persist once they form.

Hurtful Clichés: II
Much of our day-to-day conversation consists of harmless clichés: "How goes it?" or "Nice to meet you." Some other clichés aren't harmless, but they're so common that we use them without thinking. Here's Part II of a series exploring some of these clichés.

The Injured Teammate: I
You're a team lead, and one of the team members is very ill or has been severely injured. How do you handle it? How do you break the news? What does the team need? What do you need?

Confirmation Bias: Workplace Consequences Part I
We continue our exploration of confirmation bias, paying special attention to the consequences it causes in the workplace. In this part, we explore its effects on our thinking.

Human Limitations and Meeting Agendas
Recent research has discovered a class of human limitations that constrain our ability to exert self-control and to make wise decisions. Accounting for these effects when we construct agendas can make meetings more productive and save us from ourselves.

Coming September 30: Seven More Planning Pitfalls: II
Planning teams, like all teams, are susceptible to several patterns of interaction that can lead to counter-productive results. Three of these most relevant to planners are False Consensus, Groupthink, and Shared Information Bias. Available here and by RSS on September 30.

And on October 7: Seven More Planning Pitfalls: III
Planning teams, like all teams, are vulnerable to several patterns of interaction that can lead to counter-productive results. Two of these relevant to planners are a cognitive bias called the IKEA Effect, and a systemic bias against realistic estimates of cost and schedule. Available here and by RSS on October 7.

I offer email and telephone coaching at both corporate and individual rates. Contact Rick for details at rbrenmhXARWRMUvVyOdHlner@ChacxgDmtwOKrxnripPCoCanyon.com or (650) 787-6475, or toll-free in the continental US at (866) 378-5470.

The Power Affect: How We Express Our Personal Power

ion-makers in modern organizations commonly demand briefings in the form of bullet points or a series of series of bullet points. But this form of presentation has limited value for complex decisions. We need something more. We actually need to think. Briefers who combine the bullet-point format with a variety of persuasion techniques can mislead decision-makers, guiding them into making poor decisions. Read more about this program.

rbrenmhXARWRMUvVyOdHlner@ChacxgDmtwOKrxnripPCoCanyon.comSend a message to Rick