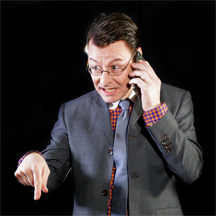 Search around and you'll probably find dozens of definitions of the practice widely known as micromanaging. [White 2010] Most definitions range in length from 10 to 30 words. Their brevity perhaps contributes to some confusion about what micromanaging is and is not. And that confusion causes us to formulate ineffective responses to micromanagement. In some cases, when we incorrectly identify an instance of micromanaging as something else, we fail to respond at all.

Some definitions describe micromanaging in terms of the motivation of those who engage in the practice. To apply these definitions, we must rely on somehow recognizing the inner workings of the mind of the person who is micromanaging. Often this is expressed in terms of relative degrees of vision and control. While the vision/control model might be useful if we have enough information about the thought processes of the person in question, it's rare that we do have that information. That's why I prefer to think about the question of micromanagement in terms of observable behavior.

A clear definition of this very complex pattern of behaviors does require more than 25 words. Here are three guidelines for clearer thinking about micromanagement.

In Typically, supervisors are responsible for
setting objectives. Those who direct their
subordinates as to how to attain those
objectives are at risk of micromanaging.writing about micromanaging instead of micromanagers, I'm being deliberate about my word choice. Micromanaging is a behavior, not a person. While it's true that the micromanaging manager creates problems for the organization, he or she creates those problems not by merely showing up for work, but by engaging in micromanaging behavior. It's the behavior that creates so much trouble, not the person.

For supervisors of people who micromanage, focusing on behavior is an essential element of effective interventions. The micromanaging person isn't the problem; the micromanaging is. It's possible that in addition to micromanaging, Morgan also contributes constructively. While finding an acceptable resolution might be difficult or even impossible, the search must begin with attempts to change Morgan's behavior.

Micromanaging is interfering in someone else's work

Micromanaging is a kind of interference in someone else's work. If Morgan chooses to be subtle about his micromanaging, distinguishing the micromanaging from legitimate interactions can be difficult. That's why I prefer considering indicators of micromanaging behavior, rather than definitive attributes. Three indicators are particularly useful.

The interference goes beyond the job description
The content and substance of the interference is outside the span of responsibility of Morgan's role in the workplace. For example, Morgan's role as Terry's supervisor can include goal-setting and securing resources. But it typically would not include deciding the time of day Terry should set for a meeting Terry leads, or choosing a filename for a plan Terry is preparing. This indicator — which I call my-job-your-job — can apply not only to Terry's supervisor, but also to anyone else interacting with Terry.
The interference is in the realm of How not What
Morgan's interference in Terry's job is with respect to how Terry achieves the objectives of her role, rather than defining what the objectives of her role are. Typically, defining objectives for subordinates — possibly in collaboration with those subordinates — isn't micromanagement if it's properly part of the supervisor's role. But supervisors who take the next step and begin directing their subordinates as to how to attain those objectives are at risk of micromanaging. Certainly there are some exceptions. For some kinds of work — safety-related and highly regulated or choreographed activities come to mind — how work is performed is one of the objectives of the work.
The interference limits job performance
The time and energy spent interfering in the work of others leads to depressed work performance of the interfering party. For example, Morgan might feel obliged to attend every meeting chaired by any of her subordinates. Or she might feel the need to review every decision reached by every team led by every one of her subordinates. In a typical organization, these burdens can be so great that the organization cannot meet its objectives, not only because Morgan is such a bottleneck, but also because she hasn't been attending to her own real responsibilities.

Two widely held beliefs cause us to overlook common cases of micromanaging. One is the belief that micromanagement can occur only between a supervisor and a subordinate. The second is that micromanaging always involves an excessive preoccupation with details. Both are misleading.

Micromanaging isn't exclusively a supervisory error
The word itself, "micromanaging," contains manage as a root. That might account for the breadth of acceptance of the belief that only managers can engage in micromanaging behavior. But peer-on-peer micromanagement is common. It involves one co-worker interfering with another in the same ways as a micromanaging supervisor might. In some instances, the interferer is acting on behalf of — and sometimes at the behest of — the shared supervisor. In whatever form micromanaging occurs, it can be destructive to relationships.
Another mistaken belief: you can't be micromanaged by anyone but your own manager. "Skip-level" micromanagement involves micromanaging one's subordinate's subordinates. "Diagonal" micromanagement involves micromanaging one's peer's subordinates. These forms harm not only the target, but also the relationship between the interferer and the target's supervisor.
Micromanaging isn't always about detail
Many definitions of micromanagement include assertions about Morgan's preoccupation with "details" of the work of his subordinates. Difficulty and ambiguity arise because these definitions merely transform the problem of defining micromanagement into the problem of defining "details."
It is possible that Morgan might interfere in some way that most people would regard as a preoccupation with detail. But Morgan can also interfere with some portion of the work, delegated to Terry, but which is not a detail.
In my view, the distinguishing factor isn't the level of detail that captures Morgan's attention. The distinction is instead the definition of the roles of manager and subordinate. If Terry is responsible for executing a specific element of the work, and Morgan interferes with the execution of that element, then Morgan is at risk of micromanaging.

Micromanaging behavior is perhaps most pernicious when it appears to be something more proper, seemingly providing benefit to the target. When this happens, the target is more likely to accept the micromanaging as appropriate. Some targets, unaware of what's really happening, actually become accomplices in the micromanaging. They believe they're acting independently, even though the interferer is making choices that more properly are the target's to make. Instead of learning and growing, these targets become increasingly dependent. And when trouble comes, the targets are held accountable for the errors of the interfering party. Micromanaging is not benign.

More articles on Managing Your Boss:

When You Think Your Boss Is Incompetent
After the boss commits even a few enormous blunders, some of us conclude that he or she is just incompetent. We begin to worry whether our careers are safe, whether the company is safe, or whether to start looking for another job. Beyond worrying, what else can we do?

Using Indirectness at Work
Although many of us value directness, indirectness does have its place. At times, conveying information indirectly can be a safe way — sometimes the only safe way — to preserve or restore well-being and comity within the organization.

More Indicators of Scopemonging
Scope creep — the tendency of some projects to expand their goals — is usually an unintended consequence of well-intentioned choices. But sometimes, it's part of a hidden agenda that some use to overcome budgetary and political obstacles.