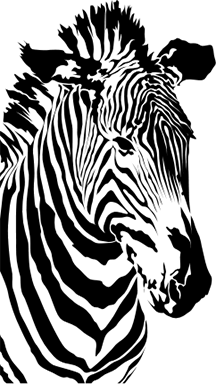 How long is your To-Do list? Too long, probably. So long that you barely have time to maintain it. Have you ever started to work on one item, only to find that you can't deal with it until you address something else? Do you ever add a completed item to your list, just for the pleasure of checking off something?

We can track only so many issues at once, and when we try to resolve them, the interactions between them make it hard to know where to start. We become confused by the tangle of problems we face.

I call this phenomenon the Zebra Effect, because it's so much like the problem the lioness faces on a zebra hunt. We can deal with it, but we must take some lessons from the lioness.

When the zebras run from the lioness, they run in a herd, because a zebra's stripes are its best defense. In a galloping herd, the stripes jumble and seem to intermingle, and the lioness, which cannot see color, is unable to resolve a single zebra from among the herd. Unless one of the zebras somehow becomes separated from the herd, the lioness is unlikely to be successful. The genius of the lioness as a hunter is her ability to force the right zebra to separate from the herd.

Organizational
problems,
like zebras,
travel
in herdsOrganizational problems use the same defense the zebras do — they travel in herds to protect each other. As the hunter, your strategy most likely to succeed is to isolate and make visible the next solvable problem, reducing the field of problems one by one. Just as in a zebra hunt, solving one problem makes the next one more solvable and skipping the wrong one makes the next one less solvable. Here are some tips derived from hunting zebra.

Keep in mind that to get at any one problem might require that you first solve one that you don't know about yet, and you might not find out about the hidden problem until you begin. When that happens, do what the lioness does — go after a different zebra.

Recalcitrant Collaborators
Much of the work we do happens outside the context of a team. We collaborate with people in other departments, other divisions, and other companies. When these collaborators are reluctant, resistive, or recalcitrant, what can we do?

Four Popular Ways to Mismanage Layoffs: II
Staff reduction is needed when expenses overtake revenue. But when layoffs are misused, or used too late, they can harm the organization more than they help. Here's Part II of an exploration of four common patterns of mismanagement, and some suggestions for those managers and other employees who recognize the patterns in their own companies.

Action Item Avoidance
In some teams, members feel so overloaded that they try to avoid any additional tasks. Here are some of the most popular patterns of action item avoidance.

Embolalia and Stuff Like That: I
When we address others, we sometimes use filler — so-called automatic speech or embolalia — without thinking. Examples are "uh," "um," and "er," but there are more complex forms, too. Embolalia are usually harmless, if mildly annoying to some. But sometimes they can be damaging.

Are your project teams plagued by turnover, burnout, and high defect rates? Turn your culture around.
Reader Comments About My Newsletter
A sampling:
Toxic Conflict Is Costly