As Walter studied the next slide, Ellen's position became clear. The slide showed her root cause diagram with colored bubbles indicating which department had contributed which causes, and Geoff owned the largest share. If she was playing the blame game, Geoff was her target. 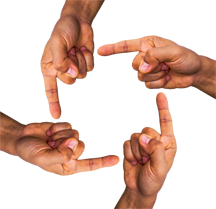 To prevent a battle between Ellen and Geoff, Walter offered, "I can see there's plenty of blame to go around, though I'm sure we could debate the allocations."

Walter's tactic might be successful. Distributing blame across the entire team is one way to prevent scapegoating. It also has an unintended consequence — it validates the idea of assigning blame.

Blame is toxic to organizations. When blame is in the air, punishment follows. To avoid punishment, we deflect blame from ourselves, or allocate it to others. We'll even take action to insulate ourselves from blame — we dodge involvement, withhold contributions, and make protective "CYA" statements.

The ensuing confusion prevents the organization and its people from learning from failures. Organizations and people who cannot learn from failures inevitably repeat them.

When blame is in the air,
punishment followsBlame-oriented cultures (B cultures) seek causes so they can punish, while Responsibility-oriented cultures (R cultures) seek causes so they can learn. To identify the culture of your organization, look at how people use language, how they acknowledge failure, how they understand failure, and how they look at the past.

Using language
In B cultures, people "take the blame," "get tagged," "get dinged," or "take the fall." Generally, B cultures have "post mortems" while R cultures have "retrospectives."
Acknowledging failure
B cultures have difficulty acknowledging failure, because acknowledgment precedes blame, and blame precedes punishment. Failing projects live on, long past the time when they should have been cancelled. R cultures acknowledge failures more easily, because they see them as opportunities to learn. Projects that should be cancelled (or restarted) are.
Understanding failure
To limit the resulting punishment, B cultures think failure is caused by the actions of a single person or organization. R cultures see failure as the result of a complex network of causes. They do this, in part, to maximize the resulting learning.
Looking at the past
In B cultures, retrospectives — if they are held at all — are starved of resources. When retrospectives do occur, they're tense, painful, dangerous affairs in which people withhold comments that could otherwise lead to real progress. R cultures invest in retrospectives, enlisting professional assistance to ensure the safety of participants. The organization and its people both benefit.

Consistent with B culture thinking, those who live in B cultures often blame the CEO or upper management for their problems. Although changing the culture from B to R does indeed require change at the top, everyone must change. Change can start anywhere. It can start with you.

Is your organization embroiled in Change? Are you managing a change effort that faces rampant cynicism, passive non-cooperation, or maybe even outright revolt? Read 101 Tips for Managing Change to learn how to survive, how to plan and how to execute change efforts to inspire real, passionate support. Order Now!

Workplace Taboos and Change
In the workplace, some things can't be discussed — they are taboo. When we're aware of taboos, we can choose when to obey them, and when to be more flexible. When we're unaware of them, they can limit our ability to change.

He's No Longer Here
Sometimes we adopt inappropriate technologies, or we deploy unworkable processes, largely because of the political power of their advocates, and despite widespread doubts about the wisdom of the moves. Strangely, though, the decisions often stick long after the advocates move on. Why? And what can we do about it?

Outsourcing Each Other's Kids
Outsourcing is now so widespread that it has achieved status as a full-fledged management fad. But many outsourcing decisions lack the justification that a full financial model provides. Here are some of the factors that such a model should include.

Letting Go of the Status Quo: the Debate
Before we can change, we must want to change, or at least accept that we must change. And somewhere in there, we must let go of some part of what is now in place — the status quo. In organizations, the decision to let go involves debate.

Learning-Averse Organizations
A learning-averse organization is one that seems constitutionally unwilling, if not unable, to learn new and better ways of conducting its operations. Given the rapid pace of change in modern markets, one wonders how they survive. Here's how.

Are your project teams plagued by turnover, burnout, and high defect rates? Turn your culture around.
Reader Comments About My Newsletter
A sampling:
Change Project Stalled?

Are you managing a change effort that faces rampant cynicism, passive non-cooperation, or maybe even outright revolt?
Toxic Conflict Is Costly